The Mesopotamian Ancient Place-names Almanac (MAPA) focuses on the Mesopotamian deltaic city of Uruk (modern Warka). It is one of the earliest mega-cities in world history, settled already from the fourth millennium BCE. Uruk possesses some of the earliest attestations of the cuneiform writing system, and boasts of being the royal seat of the legendary king Gilgamesh. 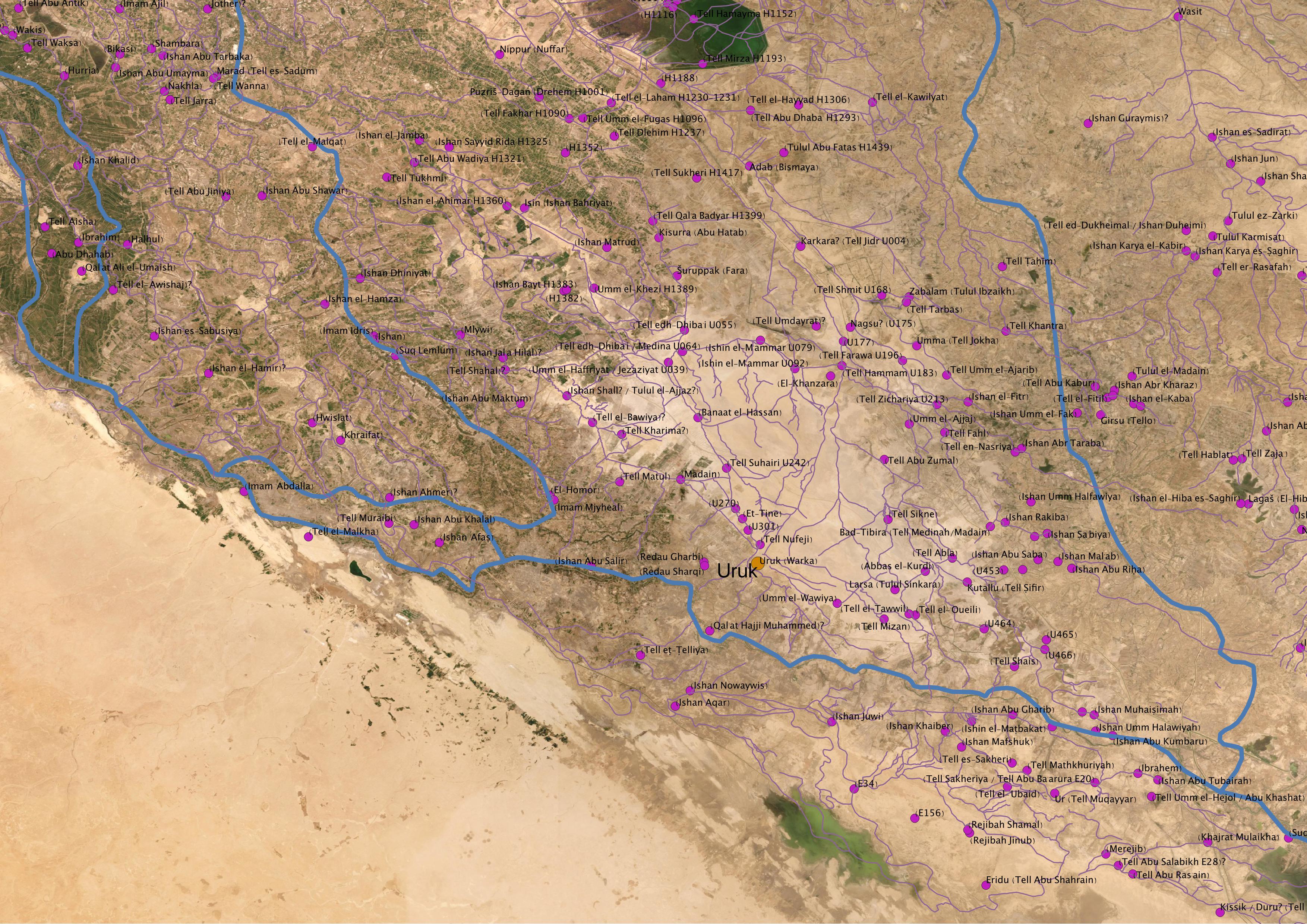 Fig 1: The archeological sites and ancient canals around the city of Uruk, as surveyed from the air and ground by different teams from the US, Iraq, and England. We would like to thank Mark Altaweel (UCL) for providing us with the survey data.

In the first millennium BCE, the city became a central hub of cult, commerce and agriculture under the Assyrian, Babylonian and Achaemenid empires. This project aimed to fill the lack of a dynamic understanding of the city’s surroundings, the agricultural communities that served the city centre, and the massive and complex irrigation infrastructure that enabled the existence of its major horticulture industry. The extensive textual record of Babylonia in the first millennium provides ample documentation of placenames in and around the city of Uruk, and despite numerous registers of placenames in scholarly literature, there are still large numbers of places and canals whose geographical location is unknown.

The MAPA team assembled the available sporadic registers (see bibliography below) into one gazetteer of Uruk and its hinterland in the first millennium BCE. The gazetteer is formatted according to the standards of the JSON-LD based Linked Places format (LPF) of the World Historical Gazetteer. MAPA is an official partner in the Pelagios Network and is collaborating on its visualization activity. The JSON-LD syntax employed by the LPF is productive both as RDF and Geo-JSON, as well as providing for optional temporal scoping of names, geometry, place types, and place relations. At its core, the LPF allows to index metadata about place records from multiple gazetteers, based on stable URIs. The first version of the gazetteer is now available as TSV and JSON formats in the GitHub MAPA repository.

Already this gazetteer data can be visualized as a network (see Fig. 3), which shows the relational proximity of Uruk’s surrounding villages, fields, canals and other urban centres. The results are based on computational analysis of relational data that does not take into account all known connections, but rather gravity and sequence according to the few known elements in the network. 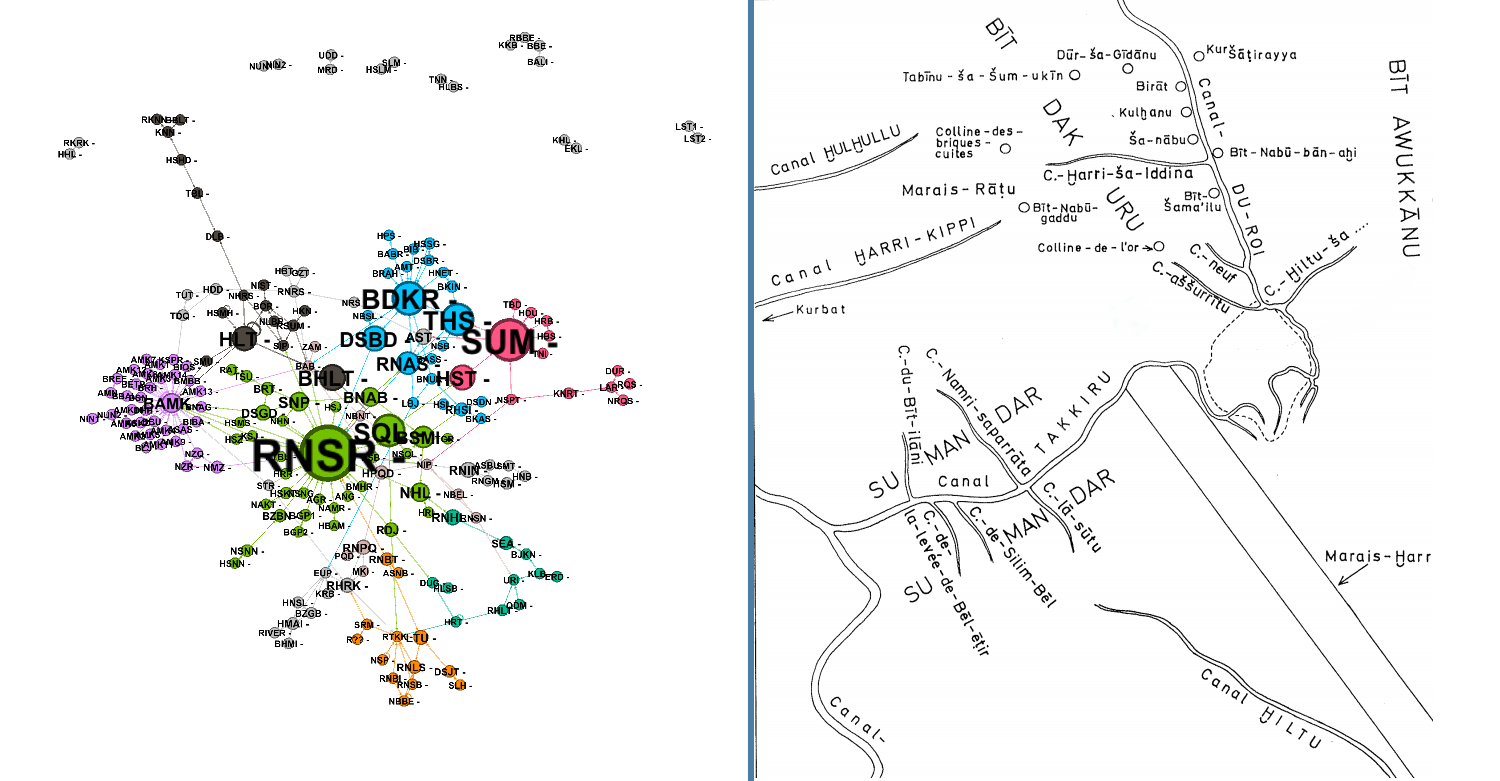 Fig 3: On the left is a reconstructed network of Urukean landscape based on cuneiform texts. Each place is marked by a three letter code. On the right is the same imagined landscape based on studies done in the 60's and 70's (Cocquerillat 1968). Especially interesting is the corroboration of recent identifications of the Chaldean tribal territories (BDKR and BAMK) and Sumundar canal (SUM).

We are continuing to enrich the gazetteer. Some of the data we collected from earlier publications is outdated, or missing information needed for our purposes. Placename instances for each entry are being added, according to the most up-to-date textual editions, as well as unpublished references, and linking them to the gazetteer. We are also curating site biographies for each of the ancient canals around Uruk. The biography describes each settlement in both physical and social terms: what kinds of social groups are active there, what are its main economic activities, and what natural features and agricultural systems and technologies are attested there. Most interesting are the outgoing and incoming goods in each site (documented e.g. in administrative texts or correspondence).

Furthermore, we are using the latest available declassified satellite and aerial imagery (available at USGS) to identify ground features (canals and settlements), and tagging them accordingly. We will also enrich this dataset by scanning more declassified U2 reconnaissance imagery available on site at the National Archives.

MAPA is a first step in a larger vision of integrating textual sources with remote sensing data for reconstructing the social and physical geography of Mesopotamia in the Age of Empires (first millennium BCE). The potential of digitally linking the vast information available in the disparate sources is substantial, and will allow an unprecedented understanding of the landscape alongside with its residents. Though modest in scale, the MAPA gazetteer is a solid basis for future work on the Mesopotamian landscape and historical geography.

We would like to thank Ariel M. Bagg, Michael Jursa, Ran Zadok, Francis Joannès, and the team at Achemenet for providing us with text summaries and transliterations of texts from the relevant periods.

We would also like to extend our appreciation to our partners at Pelagios Network, especially Elton Barker, Gethin Rees, and Simon Rainer, for their constant support and technical consultation.

Lastly, thanks to Karl Grossner from the World Historical Gazetteer, who assisted us with conforming to the JSON-LD based Linked Places format.